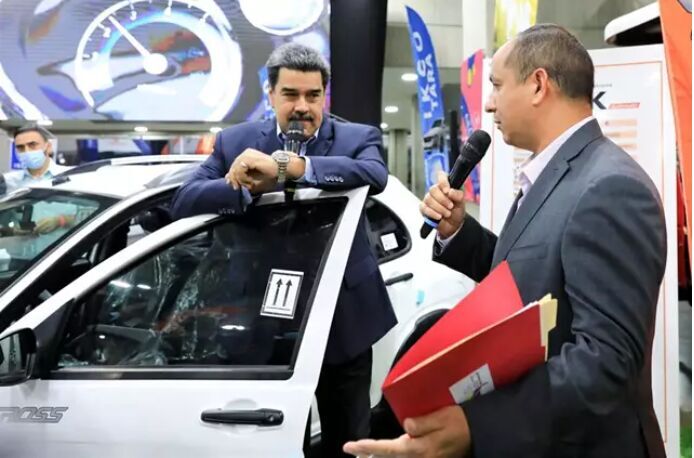 The solo exhibition has been organized by the Vice-Presidency for Science and Technology of the Islamic Republic of Iran in the Venezuelan capital, where about 80 knowledge-based companies and car-manufacturers took part in a bid to showcase their know-how and technology.

In the first day of the exhibition, President Maduro opened the fair and then inspected Iran-made products and cars.

Maduro said that four Iran-made cars worth of between 12k to 16k dollars will be assembled by Venezuelan company Venirauto.

The manufacturing of the cars will help Venezuelan people save money, because these selected cars need only seven liters of fuel per 100 kilometers, the president argued.

According to a memorandum of understanding between the Venezuelan government and Iranian car-manufacturers, the government plans to import Iranian cars; therefore, Iran’s ministers of energy, industries and roads held discussions with Venezuelan officials in order to pave the ground for implementing the MoU.

The MoU will also pave the way for exporting remarkable number of Iran-made cars to Venezuela.

Moreover, the renovation of Venirauto Company, which around 40 percent of its shares belong to SAIPA, was reviewed in order to reach an agreement to manufacture some brands such as Quick and Saina S.

SAIPA Company is showcasing Quick+ and Saina.S in the exhibition. Since the two cars are economical ones, it is predicted that the sale of these two cars would be successful in Venezuela.

The Iranian car-manufacturers have set up a system to provide people with the opportunity to register for Iran-made cars and nearly 8k people registered for Iranian cars.